The closer the rusty blade got to her, the more frightened she was.

Syada Chebet, only a teenager then, told herself it was indeed for the best. So if she braved the knife, that funny-looking blade, just for a second, it would be just fine.

Her future would be just fine.  It was only part of her genitalia, it should be fine, she thought.

“It will not take long, it cannot take long,” she soothed herself.  She would let the wrinkly and mean-looking old lady sucking on a tobacco pipe, cut her genitalia. After all, they said it should take a second, right? No, it did not!

The closer, the rusty blade got, the more frightened she got. So, she thought to herself: “I can run, I will run!” Sadly, before she could react, two giant men tore her thighs apart, and pressed them on each side.

“Stay down!” they commanded, all the while stepping on her thighs.

The old woman, also the village’s mutilation surgeon, had since abandoned her pipe and had now started speaking like she was possessed. With her rough fingers, the old woman latched onto Chebet’s genitalia, and pulled.

Photos of young Kenyan girls being circumcised in a tribal ceremony highlight the stark reality faced by those who experience female genital mutilation (FGM).

FGM, a non-medical practice involving the partial or total removal of the external female genitalia, can lead to haemorrhaging, psychological damage, complications in childbirth, fistula and even death.

Harrowing images captured by Reuters photographer Siegfried Modola show young girls from the Pokot tribe being led out of huts and towards areas where they are then cut with razor blades by traditional circumcisers.

The practice is considered a rite of passage that marks the transition to womanhood and is a requirement for all Pokot girls before they marry.

The visibly distressed girls are seen bleeding and crying after the ritual has been performed.

A girl of seven was the youngest victim of female genital mutilation (FGM) treated by the NHS in the past two years, according to new data.

Some 1,700 women and girls were treated by specialist FGM clinics but this masks a bigger problem says the NSPCC. A UK-wide helpline to protect girls at risk of ritual cutting, practised by some African, Middle Eastern and Asian communities, goes live on Monday. The victims “are hidden behind a wall of silence”, said Lisa Harker of NSPCC. The helpline is run by NSPCC child protection experts who have had training and advice from experts who work with women and girls who have undergone this form of ritual mutilation. 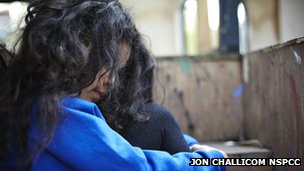 The charity describes the practice as “illegal and life-threatening” and says that it results in extreme pain as well as physical and psychological problems that can continue into adulthood. Female genital mutilation, sometimes known as female circumcision has been illegal in the UK since 1985 – but still continues in secret, often carried out without anaesthetic. Some communities from parts of Africa and the Middle East, from both Muslim and Christian traditions, believe it is a necessary part of becoming a woman, that it reduces female sex drive and therefore the chances of sex outside marriage.

Sometimes girls are sent abroad to have it done. Sometimes it is done in the UK. It involves the partial or total removal of the female genital organs, sometimes only leaving a small hole for urination or menstruation. The NSPCC says that victims are usually aged between four and 10 but some are younger. Comfort Momoh, a midwife at Guys and St Thomas’s Hospital in London, collated the figures from the specialist clinics.

She told BBC news that many women are not identified until they become pregnant and are examined by medical staff. Others suffer recurrent urinary tract infections and abdominal pain. “Many people are not aware they have had it done as it was carried out when they were babies.”