Student ‘in hiding after abuse’

A frightened student is at a “confidential address” after her parents abused her following concerns about her “westernised behaviour”, a family court judge has been told.

The woman’s father had told her “I am going to kill you now”, and said she needed to “die in a religious state”, Mr Justice Hayden heard. She had called police and left the family home with the help of officers when her parents were out, her lawyer said.

Barrister Katy Chokowry said the woman’s parents did not like her wearing leggings because they were “western clothing”.

She said the woman, who worked part-time at a McDonald’s restaurant to help her finance her studies, was “in fear for her safety”. Detail of the case emerged late today at a hearing in the Family Division of the High Court in London. The woman was not identified and Ms Chokowry did not give details of her nationality or religion.

But she said the woman was in her 20s, had arrived in the UK several years ago, had a boyfriend in Pakistan and was studying at a university. Mr Justice Hayden was told that there were fears that the woman would be made to marry “the son of a family friend” and he made an order preventing the woman’s parents from forcing her to marry.

Spain appears poised to raise the minimum marrying age from 14 to 16, in a move aimed at protecting children from forced marriages and exploitation.  On Tuesday a parliamentary justice commission passed new legislation under which 14- and 15-year-olds will no longer be able to marry. The draft law will now go to the senate for debate. Under the existing legislation it is possible for a child from the age of 14 to enter into marriage with permission from a judge, while 16-year-olds can marry with parental consent. The age for marriage without consent in Spain is 18. Spain announced earlier this month that it would be increasing the ages of consent to have sex or marry, which at 13 for sex and 14 for marriage were among the lowest not only in Europe, but across the world.

The United Nations Demographic yearbook 2013 published a table showing the minimum legal age at which marriage can take place both with parental consent and without.

Phoenix Woman, Forced Into Marriage by Family, Is Brutally Assaulted by “Husband”

A Phoenix woman forced into an arranged marriage was brought against her will to her “husband’s” apartment on Monday, where police say she was violently sexually assaulted.

According to court documents obtained by New Times, the woman’s parents “married” her to 30-year-old Mohamed Abdullahi without her knowledge in November. Court documents show the marriage was done as part of a “Muslim custom called ‘Nikah.'” The documents describe the two as being joined “culturally.”

Police say the young woman learned of her arranged marriage in December, and she fled the state upon hearing the news. After 15 days out of state, she returned to Phoenix to finish high school.

On Monday, multiple family members brought her to Abdullahi’s apartment “against her will,” according to court records.

Once at the apartment, near 33rd and Van Buren streets, Abdullahi punched her in the face and started to strangle her with one hand around her throat, police say.

Abdullahi tore off her clothes, continued to slap her and bite her, and ultimately sexually assaulted her, according to court documents.

“During the entire incident, the victim was not free to leave and physically held against her will,” the arresting officer writes in a probable-cause statement. “The defendant placed his mattress against the door so the victim could not leave after he fell asleep.”

Calgary filmmaker Iman Bukhari is breaking open the hidden reality of forced marriages in Canada in her debut documentary, “Forced.”

Bukhari spoke to 10 men and women who had been forced into marriage, all between the ages of 17 and 27, but only one agreed to appear in the film: a girl who was taken to her birth nation and forced into an unwanted marriage at age 13.

“People think that because we are in a first-world nation, these things don’t happen here, but they do,” she said.

“[This girl] was a child herself and she went through terrible, terrible things, there was a lot of violence involved, and she was 13 years old – that’s Grade 7 – can you imagine?”

Capita’s Tackling Honour Based Violence (HBV), Forced Marriage (FM) and FGM Conferencecomes as the government amends the Serious Crime Bill to introduce the mandatory duty to report all cases of female genital mutilation, and following the introduction of a new civil protection order that will protect those most at risk.

This event brings together expert speakers from police, education, local authorities, health and the voluntary sector to enhance partnership working and to examine how adopting a stronger multi-agency response can enable prevention, as well as early intervention and support for victims and those at risk.

Attend this event to gain crucial knowledge and make sure that your organisation is fully equipped to deliver effective, holistic services that safeguard vulnerable individuals.

THE National Theatre of Scotland is to put on its first women-only matinées for its new play about female genital mutilation.

Rites, by the award-winning director and writer Cora Bissett and Manchester-based theatre practitioner Yusra Warsama, examines female genital mutilation (FGM), also known as female circumcision or cutting.  Rites is based on interviews with young women and girls who have been cut, their mothers who feel the need to carry on the practice, and the health professionals, teachers and others who deal with the consequences.

The reasons for it are complicated and differ depending on a number of factors, including which of the African and the Middle East countries where FGM is concentrated the girl has come from or has roots. Bissett, whose previous work includes the powerful and award-winning Roadkill and Glasgow Girls, hopes the play will fairly and sensitively discuss FGM.

She said: “Theatre is an extremely powerful medium to explore complex stories, put cultural practice under the spotlight and to find sensitive ways of portraying traumatic human experiences.

Police officers will be at Liverpool John Lennon Airport, over the next few days, to talk to travellers about human trafficking.

The officers will be in the departures area working with colleagues from Karma Nirvana and The UK Border Force Safeguarding Team speaking with people and offering them help if they have concerns or information about issues like forced marriage, honour based violence and female genital mutilation.

Detective Chief Inspector Natalie Perischine from the Liverpool Protecting Vulnerable People unit, said: “This is a busy time of year when people will be using Liverpool John Lennon Airport to connect with destinations across the world.

“This operation is all about raising awareness of FGM, forced marriage and honour based violence and encouraging people to speak to us if they have information or concerns.

“School holidays can see an increase in the number of young people being forced to travel abroad and we are determined to work with LJLA and a range of partners to provide a visible presence and show our absolute commitment to tackling these problems and supporting victims.”

Kabul: In a grimy Kabul street, the director gives the order to roll the cameras, and filming starts on a remarkable new TV drama that boldly challenges taboos about women in conservative Afghanistan.

Shereen, the star, enters the scene and buys a few things from street vendors when suddenly her husband, a possessive and brutal man, grabs her.

But tough, no-nonsense Shereen won`t back down and a row ensues.

“Shereen`s Law”, due to be aired on Afghan TV before the end of the year, tells the story of a 36-year-old woman who brings up three children on her own while forging a career as a clerk at a court in Kabul.

Such a character is already shocking in an overwhelmingly patriarchal society where most women are confined to lives of menial domesticity.

But the show deliberately ramps up the impact. Shereen fights corruption, harassment, and rape, and tries to divorce her husband, whom she wed in a forced marriage.

More than 13 years after the fall of the Taliban, Afghanistan remains deeply wedded to traditional customs and its airwaves have never hosted anything like this before. 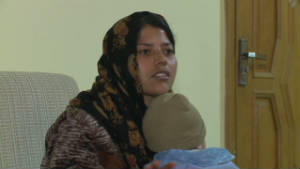 NEW YORK—Naila Amin was an American teenager who wore pink velour suits and smoked cigarettes. She had a contagious, loud laugh, and envisioned herself as a police officer when she grew up. Fast forward four months, Naila found herself trapped as a 15-year-old wife in Pakistan. Ten days after her forced marriage, she rebelled by running for her life through the streets of Islamabad.

There were few females out on that January afternoon in 2005. Naila quickened her steps as she walked by men in huts, men on dusty buses, men in honking trucks, and men buying fruits and kebabs from street carts. Many of them eyed her suspiciously.

Naila was still donned in Pakistani nuptial attire—a red dress, and Henna-laden hands. It looked strange that she was not with her husband.

She thought she should check into a hotel so she could avoid bumping into familiar faces. But the manager refused to take her in without a man by her side.