Bristol schoolgirl Fahma Mohamed, the face of a Guardian-backed campaign to raise awareness of female genital mutilation in schools, has been awarded Good Housekeeping’s outstanding young campaigner of the year award.

The award recognises “an extraordinary young woman’s determination and campaigning spirit, in her commitment to preventing the practice of female genital mutilation (FGM) and warnings to protect girls across the UK”, said the organisers, who presented the 17-year-old with the award at an event in London on Monday. 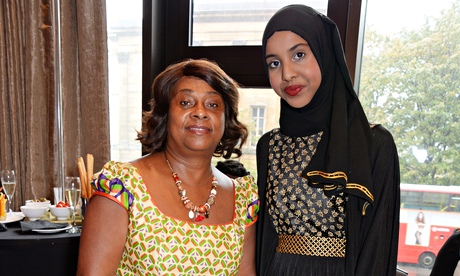 Mohamed was the face of the EndFGM Guardian campaign that launched in February and called on the then education secretary, Michael Gove, to write to all teachers in England and Wales, warning them of the dangers of FGM.

Within three weeks, her petition on Change.org had attracted more than 230,000 signatures and garnered the public support of Pakistani girls’ education campaigner Malala Yousafzai and the UN secretary general, Ban Ki-moon, who said he had been inspired after meeting Mohamed.