Swedish women have been posting photos of themselves in traditional Muslim headscarves in solidarity with a woman attacked apparently for wearing a veil.

Among the protesters from various faiths were politicians and TV hosts. The “hijab outcry” campaigners urged the government to “ensure that Swedish Muslim women are guaranteed the right to… religious freedom”. The victim was taken to hospital after the attacker tore off her hijab and hit her head against a car on Saturday. The assailant also shouted racist insults at the woman – who was pregnant – during the attack on Saturday in a Stockholm suburb, the victim’s friends told Sweden’s media. 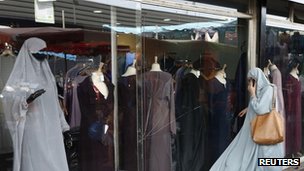 Police are now investigating the incident.

Using the hashtag #hijabuppropet (hijab outcry) a number of women across Sweden published pictures of themselves on Twitter and other social media websites on Monday.  Among the protesters were lawmakers Asa Romson and Veronica Palm, and also TV host Gina Dirawi.