Forced marriage ruins the lives of too many girls, so we’re working to end it

The summer sees an increase in girls from the UK being forced into marriage abroad. This can’t just be fixed at our borders

For most of us, the summer holidays are something to look forward to; a time when we can get away from it all and relax. But for some girls from UK diaspora communities, the summer is the beginning of a nightmare, when they return to their home country to visit family, only to find themselves getting married. The UK government’s forced marriage unit, set up to support girls and women at risk, sees double the number of cases reported during the summer holidays. This year the coalition is raising awareness of this by issuing “Marriage: it’s your choice” cards, which provide help and information for potential victims, signposting them to confidential advice. We are also reminding young people that they can speak to police or airline staff if they find themselves at an airport with nowhere to turn. 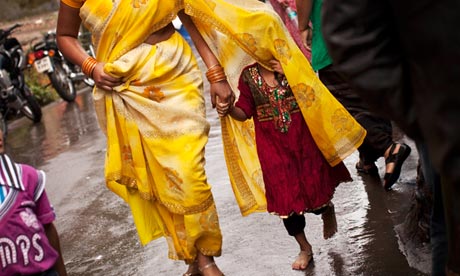 ‘In the developing world, one in three girls will be married by the time they reach the age of 18.’ Photograph: Kevin Frayer/AP

But this isn’t a problem that can simply be fixed at UK borders. While our campaign to raise awareness in the UK is necessary, we are also encouraging an international approach to tackle this problem. In the developing world, one in three girls will be married by the time they reach the age of 18, with the highest rates in south Asia and Africa. Girls as young as eight are being forced into marriage, often with men decades older than themselves. The UN predicts that more than 140 million girls will become child brides by 2020 if current rates of early marriage continue. Girls who are forced into marriage are often trapped in poverty with no means to lift themselves out. These girls are robbed of an education, vulnerable to death in childbirth and at a greater risk of domestic violence and contracting HIV. Early marriage is also inextricably linked with girls suffering domestic abuse and being coerced into sex. Put simply, it endangers life.