By the age of 17, Zeenat had been divorced three times after forced marriages. She first wed shortly after puberty to a man who abused her, an experience that recurred in her subsequent marriages.

She became so isolated that she did not go to the hospital or ask for help. Neither had she heard of India’s Protection of Women from Domestic Violence Act of 2005, which made her husband’s violent outbursts not just wrong, but illegal. Sadly, her story is all too common. Every year about 10 million girls become child brides, and one in seven girls in the developing world marries before the age of 15. Bangladesh, Nepal and India have three of the highest rates of child marriage, with 68.7%, 56.1% and 50% respectively of girls married before the age of 18. Child marriage is not just a question of poverty – although that is a critical issue – but also of how girls are viewed in society. 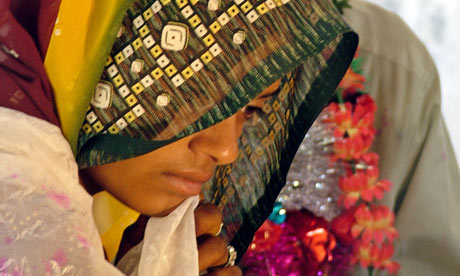 Child marriage rates in Nepal and India are among the highest in the world. Above: A 14-year-old girl on her wedding day in Bhopal, India. Photograph: Reuters

“Even with higher levels of income, there is the practice of child marriage,” said Care International’s gender director, Theresa Hwang. “It is an issue of status; girls are valued in a lesser way. In India, girls are not seen as ‘added value’. The issue is squarely tied to gender equality and social norms.” Care USA, the US arm of the anti-poverty NGO, and the American Jewish World Service (AJWS) this week received grants of $7.7m (£4.9m) and $15.3m respectively from the Kendeda fund to tackle child marriage in south Asia. Both organisations will use the money to support local NGOs.

Founded 10 years ago, the Kendeda fund worked initially on environmental sustainability in the US, but last year created a girls’ rights portfolio. AJWS will focus on India, Care on Nepal and Bangladesh.

This entry was posted on September 7th, 2013 and was last modified at September 6th, 2013 and is filed under General. You can follow any responses to this entry through the RSS 2.0 feed. You can skip to the end and leave a response. Pinging is currently not allowed.